The makers of the ‘1920‘ horror franchise have released 1921 Movie Official Trailer, the latest offering of a moderately successful series of scary movies. The 1921 Movie revolves around the lead cast dealing with their dark pasts and secrets to secure their present and future. It is a struggle between life and death and is based entirely in Britain.

1921 Movie Featuring Karan Kundrra, Zareen Khan in lead roles and is written and directed by Vikram Bhatt. Karan plays Ayush, a would-be musician who comes to foggy ol England in the year 1921, to pursue his artistic training before getting distracted, er haunted, by a shape-shifting spirit with serious anger management issues.

The Enter Rose played by Zareen Khan, who’s a medium slash supernatural fighting superhero, and is Ayush’s only means of salvation. The 1921 Official trailer features usual Bhattian elements of lilting piano tracks, questionable CGI, and singularly embarrassing attempts at lovemaking. All that remains to be seen now which is the most terrifying: the acting, the eroticism, or the film itself. 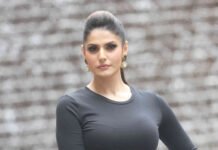