Here’s the exclusive interview of “Actress Namitha and Veera” with “Frankly With TNR” only on Talking Movies With iDream. A known face of South Film Industry, Namitha made her debut in Telugu with Sontham in 2002 and migrated to Kollywood later. Namitha acquired a huge fan following after a string of films, becoming the new glam queen of South Film Industry. However, the actress took a small hiatus from films and was last seen in Mohanlal’s Manyam Puli.

Namitha made a small screen appearance on the controversial Tamil reality show Bigg Boss hosted by Kamal Haasan. She recently tied the knot with her long-time boyfriend Veerandra Chowdhary, an actor-cum-producer. Namitha and Veera Chowdhary are here to talk about their life, journey in the film industry and Big Boss show. A candid discussion with the celebrities, with straightforward questions and extracting the truthful answers from celebrities and their unknown facts. 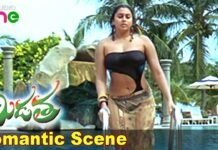