Reshma Rathore Political Entry: Joining the bandwagon of actors who’ve veered into politics is young actress Reshma Rathore who has been the part of several Telugu movies like Bodyguard, Ee Rojullo, Jai Sriram, Love Cycle and Pratighatana. According to the latest update, the 27-year-old actress Reshma Rathore has decided to contest the upcoming 2019 elections. She said “I belong to Yellandu of Mahabubabad constituency and I have grown up watching the local and national issues around me.

Even though I am in Indian film Industry but I was always in touch with my native village. Whenever I come to my village, the villagers talk to me about the local problems especially the Bayyaram steel plan. I want to develop this area and establish the Bayyaram steel plant which will generate employment for hundreds of locals. I will make an official announcement about which party I will contest.” She also hints that she wants to join a national party, rather than a regional one. Reshma Rathore will contest the election from her home area, the Mahabubabad Parliamentary Constituency. 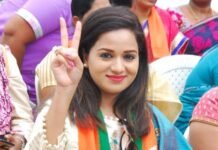