Now, through Passport Seva app, people can apply for a passport from any part of the country. Police verification will be done on the address you will give on the app. The passport will be dispatched to that address: EAM Sushma Swaraj pic.twitter.com/rdYdq6sRsb

The development has come a few days after a controversy involving the issuance of passport to an inter-faith couple hit the headlines. 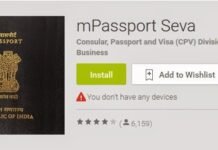