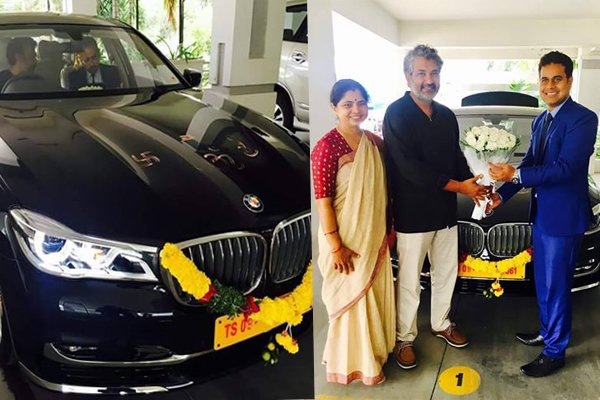 The Baahubali Movie Director SS Rajamouli is a discussion in the Indian film industry right now. The filmmaker has been busy in shaping up the script for his next film. Meanwhile, the interesting buzz reveals that he is always a man of simplicity.
He does not have an own house, and he just lives in a simple manner in an apartment along with his family members and cousins. On the other side, we have come to know that he does now own a car and he sometimes uses cab services to go to the locations.
In this scenario, he has now bought a BMW 7 series car for himself which is a worth of more than Rs 1.5 crore. The pics show that the representatives of the BMW came to SS Rajamouli and personally delivered the luxury car to Rajamouli and Rama Rajamouli at the director’s residence. The Black Sedan is worth the money with its beautiful body and make.
With the huge success of Baahubali Movie at the box office, the director was paid some decent amount, and he has used it to buy a car now.There is a lot of suspense as there is no scope even for speculations on SS Rajamouli’s next movie as he never left any clue regarding what he is going to do next. Let it come from the horse’s mouth.