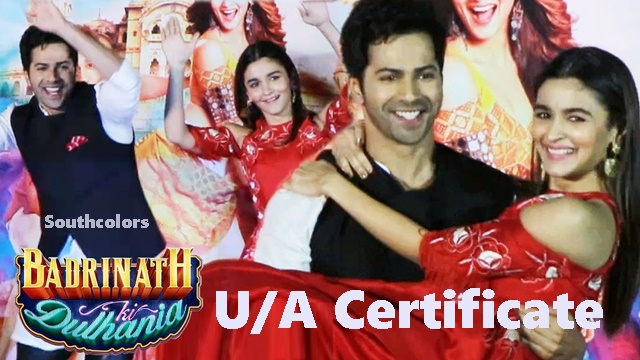 Badrinath Ki Dulhania Censor Review: The Bollywood Hot Couple Varun Dhawan and Alia Bhatt features ‘Badrinath Ki Dulhania’ is making Buzz yet again.According to a report in DNA, the CBFC has issued a U/A certificate to Badrinath ki Dulhania Movie. It comes with a rider though: The certificate is valid subject to facilitating a No Objection Certificate (NOC) from the matrimonial website, Shaadi.com.

“The name of the site crops up throughout BKD and hence, the CBFC has asked producer Karan Johar to submit an NOC from the site in question. Only then would they be allowed to retain the name in the film,” it quoted a source as saying.
The Badrinath Ki Dulhania film is the second installment of the earlier Franchise Humpty Sharma Ki Dulhania. The romantic comedy film features Varun Dhawan as Badrinath Bansal & Alia Bhatt as Vaidehi Trivedi.
The Badrinath Ki Dulhania film is about A man (Varun Dhawan) and a woman (Alia Bhatt) fall in love despite their opposing views on gender and life in general. The Film is Directed by Shashank Khaitan and Produced by Karan Johar under the banner of Dharma Productions.The film is slated to release on 10th March 2017 As Eva of Holi festival 2017 special.