Mahanati The biopic of legendary actress Savitri, starring Keerthy Suresh, is being praised by one and all. It’s Tamil version, Nadigaiyar Thilagam, was released on 11th May 2018, two days after the release of Telugu movie Mahanati, celebrities have been tweeting to express their feelings and good wishes for the film and praise Keerthy Suresh and Dulquer Salmaan for their work. Now AP CM Chandrababu Naidu Appreciates Mahanati Movie Team has also been added to the list. 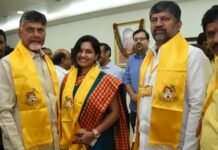