SouthColors
Home Entertainment Finally Singer Suchitra opens up About Controversial SuchiLeaks
The South Indian playback singer Singer Suchitra grabbed all her attention and made headlines last month after her Twitter page was flooded with the intimate pictures and videos of several celebrities, including Dhanush, Trisha, and Hansika Motwani, Sanchita Shetty. Those pics and videos have created a sensation on the social media. The actors themselves did not comment on the issue. However, those were later deleted.
In a recent media interview, Singer Suchitra opened up about the incident and revealed how she managed to return to normality. When asked whether she is embarrassed about the whole episode, Suchitra replied, “I am, but more than that, I feel a deep sense of responsibility and profound shame with respect to the kind of content that was being posted in my name”.
Earlier, the singer had tweeted in her defense, “Please guys – I don’t even socialize with actors, I don’t have any of their pictures. More than anything – I am not a mean person.” Suchitra also mentioned in the interview that she is working on improving that and is feeling a lot better now. 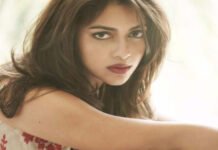 Amala Paul Open up on About Suchi Leaks