Going to the Goli Soda 2 Official Trailer talks about the lives of four youngsters from different strata of society, struggling to make it big in the real world. ‘Goli Soda’ revolved around the lives of four orphans and their struggle to establish an identity for themselves. Just like its predecessor, ‘Goli Soda 2’ has all the ingredients to strike a chord among the audience.

The film also has Gautham Menon and Samuthirakani in supporting roles. Goli Soda 2 Movie is slated to release later this year. 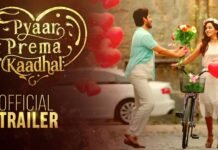