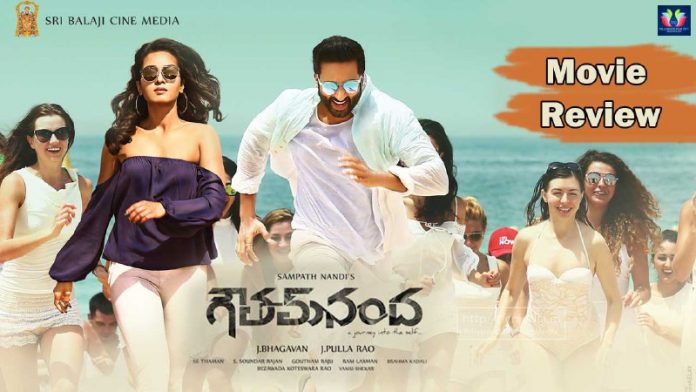 Goutham Nanda is a movie that is based on the thirst for money and what it can do to people. Everybody, everywhere in the world are connected by a single factor, money. The tagline that comes along with title Goutham Nanda is ‘A journey into the self.’

Gopi Chand Performance is good. The film is a screenplay-based film and the visuals are extraordinary. Director Sampath Nandi has come up with a good subject with authentic screenplay and dialogues. This is a full-length action entertainer. It’s his personal journey that’ll keep the audiences glued. The film has been mounted on a wide canvas, there’ll be something that everyone will take back home.

Goutham who is vexed in his life with just spending money on parties and alcohol. He wants to experience something which is missing in his life. Goutham meets a guy called Nanda and there come more twists which are bit confusing. Nanda wants to be in the position of Goutham because of his greediness. The climax is something unusual and the movie can be watched only once as the second part has more sentiments and actions. The audience cannot get what they want in the second half.

Verdict: A one time watch with more to be expected,#GautamNanda – Interesting and Entertaining 1st half. The comedy worked out well. Liked Gopichand’s Performance. @MusicThaman BGM a Big Plus.The audience will see a surprising climax between the hero and the Villain.