The Tirumala Tirupati Devasthanam TTD temple that receives 60,000-80,000 people every day is managed by hundreds of officials and priests. The documentary takes a detailed look at the priests, Jeevars (sadhus allowed to open and close the sanctum sanctorum), the kitchens that prepare meals and laddoos for lakhs of pilgrims everyday and the trek to the temple itself, Over 50,000 pilgrims every day get a ‘darshan’ of the idol at the Tirumala temple in Chittoor district of Andhra Pradesh.

The one-hour Tirumala Tirupati Devasthanam TTD special documentary gives viewers an in-depth access to the massive scale of operations, the technology used at various stages, the processes and the people who manage the mind-boggling number of devotees visiting this iconic temple. 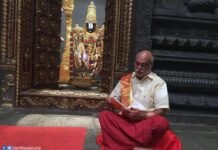