The Director JB Murali Krishna’s Jamba Lakidi Pamba Movie 2018 starring Srinivasa Reddy, Siddhi Idnani, and Vennela Kishore, Jamba Lakidi Pamba 2018 Movie Review and Ratings has received a mixed average talk from the audience. Jamba Lakidi Pamba is a comedy fiction film, which is said to be a modern version of EVV Satyanarayana’s hit film of the same name. Murali Krishna has written the script for the movie, which has been produced by Ravi, Jojo Jos, and Srinivas Reddy. The film has received a U/A certificate from the censor board and its runtime is 2.21 hours.

The Jamba Lakidi Pamba new movie revolves around the story of a couple, who opt for divorce following a dispute. Varun (Srinivasa Reddy) is a software engineer and Pallavi is a fashion designer. The two are married and disputes crop up in their marital life following which they meet divorce lawyer Hari (Posani Krishna Murali). The twist in the tales the lawyer dies and returns to earth on a special mission.

Srinivasa Reddy as Varun is good, his mannerisms as a woman were Ok. New heroine Siddhi looked like too young, not suited well to the manly woman role (after role reverasal). Posani Krishna Murali is annoyingly lengthy dialogues in this film, he did a lot of over the top action. Vennela Kishore as Swaroop (Posani’s assistant lawyer) has been energetic occasionally but that doesn’t suffice. Jaya Prakash Reddy, Shakalaka Shankar, Dhanraj, Raghubabu and Satyam Rajesh are wasted. Hari Teja’s role as a maid is just okay with cliched comedy

Verdict: Jamba Lakidi Pamba is a decent film with ample amount of humor sprinkled in regular intervals. The movie concept is inspired by it’s a boy girl thing but the director JB Murali Krishna made sufficient changes to make it fresh. 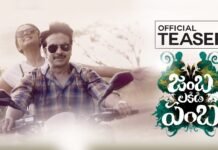 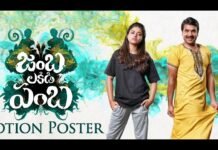