Recently Telugu actress Sri Reddy went topless outside the Telugu Films Chamber of Commerce at the Jubilee Hills in Hyderabad to protest against casting couch in the Telugu film industry. Day by day, new names are popping up in the media regarding the sexual harassment and torturing the women in Tollywood. Social Activist Sandhya says, Jeevitha sent hostel girls to her Husband’s Rajasekhar bed.

There was a TV debate on a popular Mahaa News channel where a social activist Sandhya revealed about how Jeevitha Rajasekhar used to lure the young college girls for fulfilling the sexual pleasures of her husband Dr.Rajasekhar.

The women organization activist alleged that Jeevitha Rajasekhar threatens and sends hostel girls to her husband Rajasekhar for quenching his sexual thirst. Sandhya said that Jeevitha also used to blackmail the working women who live in Ameerpet area emotionally. According to Sandhya, Jeevitha used hostel girls as sexual objects. Before coming to any conclusions, let’s wait to hear the response from the other side. 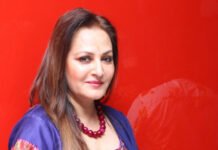