Vara is an orphan, vagabond valet driver who has a massive pile-up of debt to pay. Julie is the quintessential rich girl he loves to stalk. Two individuals fall in love with each other but choose not to define their relationship, confusing those around them. But when their relationship goes south and he ends up embroiled in a comedy of errors, how will Vara cope? Vara is a person who doesn’t believe that he needs anybody’s permission to be with his love.

The movie is a romantic entertainer with a good storyline. The film has music is good. Naveen Chandra & Nivetha Thomas performance is the main highlight of the film. Other characters justified their roles.

The first half of the film isn’t engaging and has a mooted narrative. Two songs and almost an hour into the movie, ‘Juliet Lover of Idiot’ pokes fun at the LGBTQ community and justifies stalking. There are few scenes however that are engaging with two twists coming one after another right before the interval.

Verdict: On the whole, Juliet Lover of Idiot is one outdated crime thriller which is dragged to no extent. Too many subplots, illogical narration, and unnecessary romantic scenes bore the audience to no extent. This film ends up as a long and painful watch this weekend. Just stay away from this one. 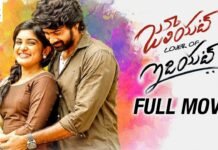