Jumanji Sequel: Sony Motion Pictures chairman Tom Rothman says 2017 film “Jumanji” will be getting a sequel, which will release in December in 2019. The Rothman shared the update at Sony’s CinemaCon presentation here. He also acknowledged that the release date would pit it against “Star Wars: Episode IX”, which is set to premiere around the same time, reports variety.com.

The world of Chris Van Allsburg’s book “Jumanji”, narrating the story of a young Alan Parrish getting trapped in a board game, found its way to the silver screen in 1995. Robin Williams was its main lead. The story was back on the big screen in 2017 with a modern twist. In “Jumanji: Welcome to the Jungle”, a group of high school students gets lost in the jungle after laying their hands on a video game console featuring a version of the game Jumanji. 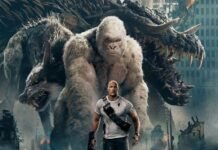