Ahead of the Karnataka assembly polls in April-May, Kannada film superstar Upendra on Tuesday announced his resignation from the party he formed last year after “internal issues” and vowed to form a new party soon. “I have tendered my resignation to the Karnataka Pragnyavanta Janata Party (KPJP). I will soon register (with the Election Commission) my new party ‘Prajakeeya’ and contest in the upcoming state elections,” Upendra told reporters here.

The 49-year-old popular actor had taken the plunge into politics with the KPJP, which he formed on October 31.”The mindset with which I had entered politics was not to gain power or money but to bring about a change in governance,” the actor said. He said a few members of the KPJP were deflecting the party from the ideals it was set up on. The party members had disagreements over the nomination of office bearers, party candidates, and other issues, he said.

“Prajakeeya will continue to focus on having a transparent government, health, education and welfare of citizens,” said the actor, clad in khaki. While announcing the formation of the KPJP last year, the actor-director had attacked the current political system, saying several politicians make promises but do not deliver. His party would be run by the people for the people to meet their needs, Upendra, known for his acting in Kannada, Telugu and Tamil films, had said. 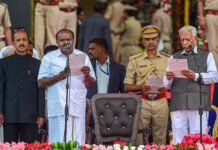