American models and BFFs Kendall Jenner had the most exciting girls’ night out recently. The gorgeous 22-year-olds took turns to pose seductively for the other person and later posted those hot pictures on Instagram. Between the two, it is Kendall who is raising eyebrows with a bolder appearance. Wearing just a pair of Calvin Klein underwear, Kendall Jenner goes topless photo will make you take a double look at it.

Kendall Jenner Looking relaxed in a pair of Calvin Klein undies, Kendall Jenner places her arm strategically in front of her bare chest in the picture. With her hair tied up in a white towel, she is sipping from a glass of red wine while holding a phone in another hand. The bathroom photo is definitely a hit amongst Kendall Jenner’s fans and followers as it has already attracted more than 3.4 million likes!

Kendall Jenner is known for having ‘free-the-nipple’ moments. Time and again, Forbes’ highest-earning model has gone braless, be it on the runway or the prestigious red carpets. Kendall Jenner Instagram account is also full of naked and topless moments and adding to this list is Kendall’s latest snap, which is taken by her best friend and model Hailey Baldwin. The girls took naked pictures of each other during a night out, because why not? 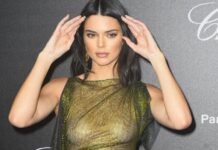