Magadheera Telugu Movie starring Ram Charan and Kajal Aggarwal was released in 2009. It was a massive blockbuster and had set the all-time record back then. Nearly 10 years later, the film has been dubbed into Japanese. The film is being dubbed into Japanese language and Magadheera Japanese Version release date is confirmed on August 31st. Magadheera is an action fantasy drama based on re-birth concept. The film was produced by Allu Aravind under Geetha Arts banner.

The Director SS Rajamouli is heard to be pushing the Japanese version of ‘Magadheera’ following a good response to his last outing ‘Baahubali 2: The Conclusion.’ Incidentally, Baahubali 2 was a decent hit in Japan. Rajamouli and his team received a grand welcome and saw the huge turn of fans for them. So, to build a right market for his future films, Rajamouli is releasing his old hit in Japan. 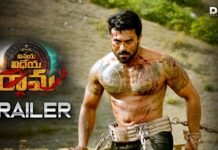