Finally, the 18 years old actress has achieved one more milestone. On this occasion, Priya Prakash Varrier took to Twitter and wrote, “The fastest video from South India to cross 50 million views on YouTube.” According to the latest buzz, she is charging the staggering amount of Rs 8 lakhs for a single post on Instagram. Oru Adaar Love is helmed by Omar Lulu and is expected to release during Eid this year. 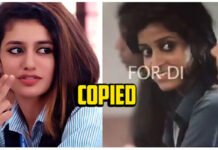