Mr Majnu Theatrical Trailer was unveiled by Young Tiger NTR during Mr. Majnu pre-release event of the film held at JRC Convention in Hyderabad on Saturday. Vicky (Akhil Akkineni) sported a casanova role who falls for Nidhi Agarwal. Though she falls for him he discloses her that his love lasts for just one month with any girl.

However, Nidhi Agarwal who desperately craves for his love doesn’t wish to give up. And there comes an emotional conflict whether or not the love to be continued and to be ended on a happy note with their wedding. But then, the answer is kept confidential. 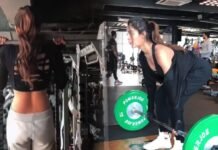