Nora Fatehi Belly Dance Video: Moroccan – Canadian actress, dancer, and model Nora Fatehi made her Bollywood debut in 2013 with Road: Tiger Of The Sundarbans. But it was only in 2015, when she shook the leg in an item song in SS Rajamouli’s Baahubali: The Beginning starring Young Rebel Star Prabhas, Rana Daggubati, Tamannah Bhatia and Anushka Shetty. While she starred with two other beauties in the song, Nora Fatehi grabbed several eyeballs with her sexy moves. And now, once again the actress is in news headline because of her new video in which she is seen in belly dancing.

Actress Nora Fatehi dressed in white and silver belly dance costume, dancing like there’s no tomorrow. Nora Fatehi is a trained belly dancer. Hot Nora Fatehi shared the video on her Instagram and captioned it, “Impromptu solo during my performance for Miss India Femina diva awards 2018 Bangalore Didn’t prepare for my solo .. I was just feeling the music.(sic).”

Her last video where she swayed to the moves of Swag Se Swagat from Bollywood Tiger Salman Khan and Katrina Kaif’s Tiger Zinda Hai got a superb response on her belly dancing act to the song. 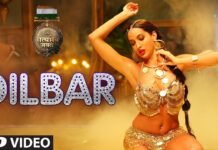