Pakistan’s Information and Broadcasting Ministry has asked film exhibitors to not screen Indian films two days before and two weeks after Eid. The ministry, in its letter dated May 24, says that the move was in order to “revive and promote the local film industry in Pakistan” and that the restrictions would be in place around the period of Eid-ul-Fitr and Eid-ul-Azha.

“All the importers/ distributors of the foreign films have been directed to restrain from the screening of Indian films in cinema houses all over the country during the above mentioned time period,” the letter said. He said the notification was also applicable for the Eid-ul-Adha holidays which will fall around late August or September.

The Pakistani films’ producers and artists have been complaining for the last two years that their new films face stiff completion from the Indian and Hollywood movies and due to the limited number of screens in the country they are not able to do good business and in some cases even recover their invested money in the films. This Eid also a number of new Pakistani films are due for release but it was not clear which Indian films are slated for release during the holidays in India and elsewhere. 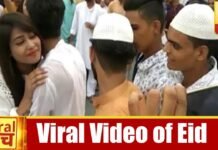