Pantham Movie Audio Launch Live Event on June 21, Actor Gopichand’s much-awaited film Pantham ‘For a Cause’ produced by K.K. Radhamohan on his Sri Satya Sai Arts banner is set to release on July 5. On Sunday, the film’s team organized a press meet in Hyderabad where the producer shared: “This is the seventh film for our banner and we are glad it is a landmark film for Gopichand. We’ve gone all out and left no stone unturned in production. The Post-production of the film is presently going on.

As we said earlier, the film is releasing on July 5. And we scheduled the shoot in such a way to meet the date. Key scenes and some songs have been shot in the UK. Pantham movie audio launch live will take place in Vijayawada on June 21 after which we have planned a Pantham Movie pre-release event in Vizag.”

Director Chakravarthy said, “We are happy with how the film has shaped up and hope we get the audiences blessings.”Art director AS Prakash was also a part of the event. Directed by K. Chakravarthy, who wrote the screenplay for films like Balupu, Power, and Jai Lava Kusa, the film is Gopichand’s landmark 25th film. Mehreen Pirzada is the female lead in the film. 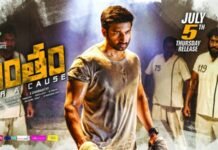 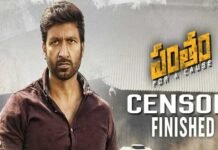 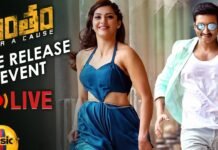