Paper Boy Movie Release Date has been confirmed on September 7th. Paper Boy Telugu Movie Starring Santosh Shoban, Riya Suman and Tanya Hope in the lead roles, the film is being directed by Jaya Shankarr. Director Sampath Nandi has provided the script for the film as well as producing it.

This is a romantic entertainer and the teaser and two songs which were released earlier got good response. The Paper Boy Movie teaser has got over 2.5 million views. It’s a tale of an engineering graduate who falls in love in with a girl. The Paper Boy Movie Songs and music composed by Bheems and Soundar Rajan has handled the cinematography. 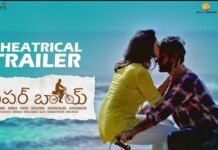