Mega Power Star Ram Charan and Pooja Hegde Special Song From Rangasthalam 1985 Shooting Begins from today and this song is choreographed by Jani Master. As per reports, Pooja Hegde will be paid a whopping remuneration for this special song. Pooja Hegde Hot dance moves with Ram Charan are going to be a visual treat to the movie lovers. The item song is being shot in a specially erected set in the Capital City.

The Sources close to the team said, “Devi Sri Prasad delivered one of his best works for Rangasthalam. Most of the people are aware of DSP’s special connect with Director Sukumar and it will be once again evident in this film. Rangasthalam songs are going to top the charts within no time”.

Rangasthalam 1985 Movie Helmed by Sukumar, the film will have a Samantha Akkineni as the female lead. Aadhi Pinisetty, Prakash Raj, Jagapthi Babu and Anasuya Bharadwaj are playing pivotal roles in the film. The upcoming village based film, which has music by Devi Sri Prasad, has been predominantly shot against the backdrop of Godavari belt. Mythri Movie Makers are producing ‘Rangasthalam‘ and the film is slated to hit the screens on March 30, 2018. 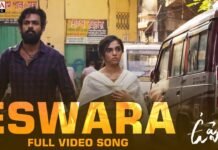