Rangroot is set in Germany during the war and will chronicle his experiences with other men of the infantry. The movie is made in the regional language, Punjabi, but looks to have a broader appeal for the audiences. The movie has been a dream project for the Singer turned Actor, and if the trailer is any indication, he is going to make a very big impact on the audiences.

The Sajjan Singh Rangroot trailer also asks the important questions about the cost of the sacrifice made by the Sikh soldiers on the German soil, and how the trauma of war can never leave a person. Batra has chosen some very beautiful shots, like a train movie through the fields, or the sunshine coming onto the bloody battlefield.

Rangroot is something that has been seldom done before in Indian cinema, an unabashed War movie, with a central hero who is known in the History. This could be another step forward for the Punjabi cinema as well as another direction for the actor that will surely win him acclaim. 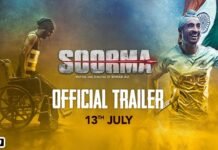