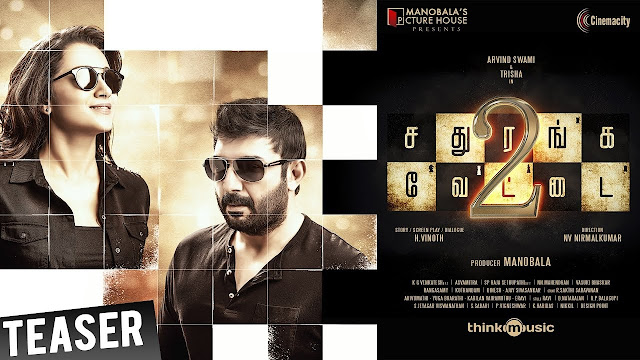 Sathuranka Vettai 2 Movie Official Teaser: The official teaser of Sathuranka Vettai (Chess Hunt) 2 was released by popular actor Siva Karthikeyan on Friday morning. Sathuranka Vettai 2 Starring Arvind Swamy and Trisha Krishnan, the film is a sequel to the highly successful 2014 film, Sathuranka Vettai.The film also stars Prakash Raj, Nassar, Chandini, Sreeman, Manobala, Kumaravel, E Ramadoss, Balaji and Thirupathi in supporting roles.
The Sathuranka Vettai 2 film, which plays out like the moves on a chess board, is a heist drama. Shot mostly in Malaysia, the story weaves in the untold truths about the con culture, particularly centered on the IT world. Interestingly, this is the first time Actress Trisha and Arvind Swamy coming together in a film. Both of them play characters with negative shades.

Sathuranka Vettai 2 Directed by NV Nirmal Kumar, the film has been written by H Vinoth, who wrote and directed the first part of the series called Sathuranka Vettai.Produced by Manobala, Manobala Picture House, and Cinema City.
Share