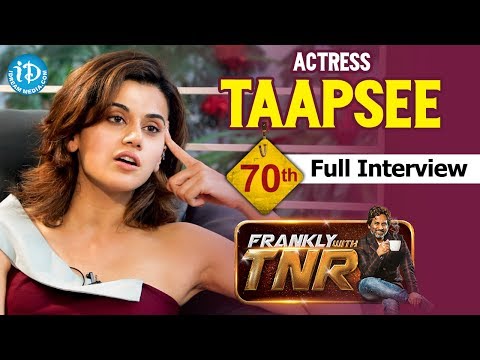 Taapsee Pannu Interview: Actress Taapsee Pannu is a girl from Delhi, who became popular as a heroine in the south, before making a name for herself in Bollywood. Taapsee Pannu acted in Telugu, Tamil, Kannada and Bollywood films and she won several awards during her modeling days, like Miss fresh face, Miss fresh skin etc.

Actress Tapsee Pannu shifted her concentration to Bollywood and she is choosing different subjects like the recent Pink in Bollywood and also The Ghazi Attack etc.
A head of #AnandoBrahma movie release, Tapsee Pannu strikes an honest conversation with “Frankly With TNR”, She also spoke about her inner stories and also about her film career in this exclusive interview only on “Talking Movies With iDream”.