India’s first space adventure movie, Tik Tik Tik starring Jayam Ravi and Nivetha Pethuraj, directed by Shakti Soundar Rajan, has hit the theaters today on 22nd June 2018 in a very grand manner. Jayam Ravi is playing an astronaut in Tik Tik Tik who is trying to save Earth from an incoming asteroid impact. Indeed, it is a daring attempt which is a first-of-its-kind in the Indian cinema as the Shakti Soundar Rajan-directorial gets the credit of the first space flick to be made in the country. Tik Tik Tik Movie Review Below:

The Defense Space Division (DSD) needs a missile to destroy an asteroid which is expected to hit Chennai. With little time left for the collision, it can only lay its hands on the missile through illegal ways. It brings jailed escape artist Vasu for the mission. After two days of training, he and his friends start the journey to space before the hero gets a threatening call stating that his son will be killed if he fails to obey their orders. What follows next should be seen on-screen.

On a whole, Tik Tik Tik is a new age space thriller which provides a different experience to the viewers. Good graphics, interesting setup, and strong performances are the major advantages. However, the Tik Tik Tik 2018 movie has its own share of flaws and that may obstruct the flow for a section of the audience who are not used to such subjects. If you are a big fan of space thrillers, give this movie a try and witness the first-of-a-kind attempt in Indian cinema which ends up as a decent watch this weekend.

Jayam Ravi as the con-artist-turned-astronaut has delivered his fantastic performance. He also does justice to the character of a father. Nivetha Pethuraj as the stylish Defence Space Division officer performs well. There is absolutely no romance in the movie, which works to its advantage. Jayam Ravi’s son Aarav Ravi made his debut in the industry with Tik Tik Tik. Balaji Venugopal, Rethika Srinivas, Jayapraksh, Arjunan, and others performed accordingly.

Verdict: Tipped as a first-of-its-kind space film of the country, Tik Tik Tik offers a new experience for the audience. Though there are shots where you feel the CG could have been done better, the crew has done a decent job considering the budget and time. 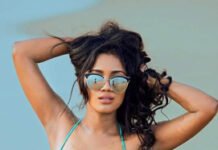