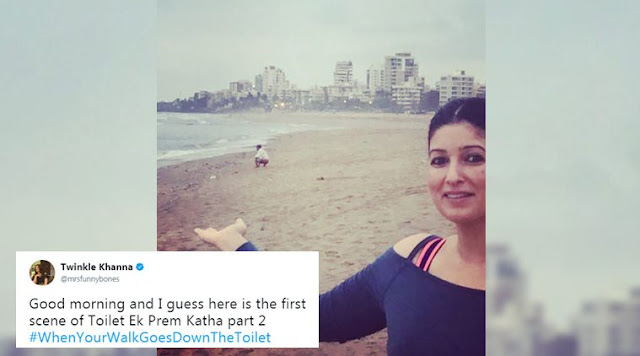 Akshay Kumar and Bhumi Pednekar,’Toilet: EK Prem Katha‘, directed by Shree Narayan Singh may be still minting moolah at the box office, but Twinkle Khanna, the wife of Akshay Kumar, just shared the ‘first scene’ of, what looks like, ‘Toilet: Ek Prem Katha Part 2‘ on social media. Mrs. Funnybones is winning hearts with her sarcastic “toilet” tweet on Twitter and her tweet is going viral.
Twinkle Khanna was out for a morning walk on a Mumbai beach and spotted a man openly defecating right there! Adding a pinch of satire, Twinkle posted it on social media with the caption: “Good morning and I guess here is the first scene of Toilet Ek Prem Katha part 2 #WhenYourWalkGoesDownTheToilet.”
This pic a direct reference to Akshay Kumar ‘s film which is a satirical comedy in support of Indian Prime Minister Narendra Modi’s Swachh Bharat Abhiyan, a governmental campaign to improve the sanitation conditions, with an emphasis on the eradication of open defecation, especially in the rural areas.