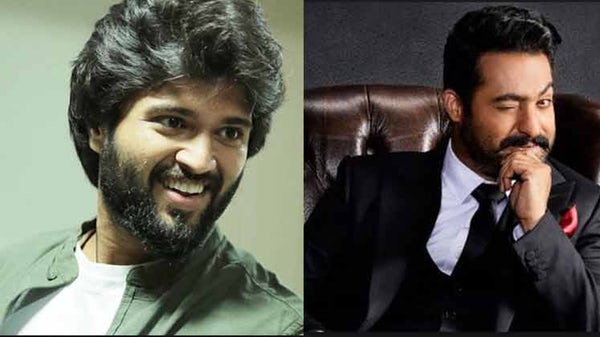 Actor Vijay Devarakonda is not missing any opportunity to promote his upcoming film ‘Arjun Reddy’. The actor, who got much publicity for his movie with Congress leader V. Hanumanth Rao tearing his poster on an RTC bus, is now entering the Bigg Boss sets in Lonavla, Pune.
According to the latest news, Vijay Devarakonda will appear as a special guest on Bigg Boss Telugu which is being hosted by Jr NTR  has already created records of sorts with massive TRPs. The episode will be aired on Thursday, August 24, 2017. Earlier, Rana Daggubati entered the Bigg Boss sets to promote his movie ‘Nene Raju Nene Mantri’. After Rana, recently actress Tapasee Pannu also in the house to promote her film ‘Anando Brahma’. Now, Vijay would soon follow this mantra to get the viewers interested in the movie.
Coming to film, Arjun Reddy Telugu movie is based on a true event,  newcomer Sandeep Reddy has written and directed the film. The film stars Vijay Deverakonda and Shalini Pandey in lead roles, while yesteryear Kanchana, Jia Sharma, Sanjay Swaroop, Kamal Kamaraju and Gopinath Bhat are playing key roles in the movie. The film is produced By Pranay Reddy Vanga & Under The Banner of Bhadrakali Pictures.Music is composed Radhan.