The South Korean singer and actor Suzy Bae has revealed why she signed a government petition supporting popular YouTuber Yang Ye-Won, who had earlier said that she was sexually harassed. The former miss A member wants to bring justice to Ye-Won. In a long post, which she shared on Instagram, the singer talked about Ye-Won’s sexual harassment controversy adding that what happened to the YouTuber is disappointing. She wants an investigation to be held in the case if the post is true.

She started her post describing how Yang Ye-Won was sexually harassed by a studio during a photo shoot which made her want to attempt suicide. According to Suzy, Ye-Won was not aware of the nature of the photoshoot planned by the studio. She got to know about its explicit nature only after reaching the location. 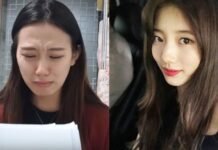