Home Entertainment A Glimpse of Cheliyaa Teaser Starrers Karthi and Aditi Rao Hydari
A Glimpse of Cheliyaa Teaser: Here presenting the glimpse of director Mani Ratnam’s ‘Cheliyaa.’ Starring Karthi and Aditi Rao Hydari in the lead roles, producer ‘Dil Raju’ is presenting the movie in Telugu.The first single track from the music album will be out on February 2nd. AR Rahman is scoring music for this film. 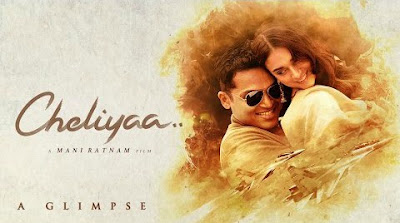 Cheliyaa is a romantic love story features actor Karthi and Aditi Rao Hydari in lead roles. It is written, directed and produced by  Mani Ratnam himself. He producing the film under his banner A. Sreekar Prasad Madras Talkies.AR Rahman is composing Music for this whereas Ravi Varman handling cinematography and Sreekar Prasad does editing. Shyam Kaushal has taken care of the stunts and Master Brinda of the choreography.
Tollywood Popular Dil Raju brought Telugu dubbed version rights of the Kaatru Veliyidai film. Initially, It is titled as ‘Duet’ in Telugu but today the title is changed as ‘Cheliyaa’. Both Tamil and Telugu versions will be released in March 2017.

Cheliyaa Teaser: The makers of Cheliyaa Teaser released the first teaser today, on eve of Republic day. The 45-second beautiful clip is the sneak peak of Aditi Rao Hydari’s character in the film. The clip does not reveal anything about her role yet leaves a good impact on the viewers. AR Rahman’s melody makes the visuals in the promo video more beautiful than they already are.