Actress Bhavana who got engaged Kannada producer and businessman Naveen at a private function in Kochi in the month of March is set to tie the knot soon. According to the latest update, Bhavana will be getting married to Naveen on 22nd December 2017. The wedding is likely to be a low-key affair like their engagement and will take place in Thrissur.

The actress has worked in more than 75 films in several languages including Malayalam, Tamil, and Telugu. She made her acting debut when she was 16 years old.She has acted in few Telugu movies also including ‘Mahatma‘. Naveen was the producer of Bhavana’s first Kannada movie Romeo.

Recently the actress was in the news as she was kidnapped and then molested. The incident took place when she was returning home from a film shoot. The gang forcibly boarded her car when it stopped near a traffic signal and molested her for almost two hours inside the vehicle. Actor Dileep was arrested and jailed in this case for hatching conspiracy to kidnap actress Bhavana. The case is still going on. 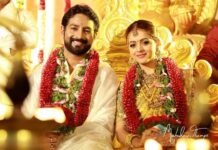