Actress Rubina Dilaik looked resplendent in a white lehenga with colourful embroidery while Abhinav complemented her in a blue sherwani. Rubina Dilaik added a spectacular choker and matching maang-tika, chooda and a small set of kaleere. She smiled and laughed as she made her way towards the mandap, as shown in videos and pictures shared by fan clubs on social media. 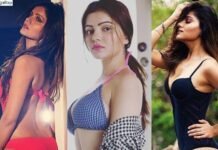