The first look poster of the Manoj Bajpayee, Sidharth Malhotra starrer Aiyaary is out. The excitement around the film has been building up for quite some time now. Sidharth Malhotra took to Twitter and shared the Aiyaary Movie First Look Poster on 16 December. The Aiyaary poster sees a plethora of characters on it. From Sidharth Malhotra, Manoj Bajpayee, Anupam Kher, Adil Hussain, Rakul Preet Singh, Vikram Gokhale to Naseeruddin Shah, the poster is a hit with a flair of Indian national flag all over it.

Aiyaary Movie is a crime drama written and directed by Neeraj Pandey. The film is based on a real incident and would feature Manoj Bajpayee as an army officer while Sidharth Malhotra will essay the role of his protégé. Rakul Preet Singh is touted to be paired romantically opposite to Malhotra. The film was announced in April 2017 and is scheduled to release on 26 January 2018.

Talking about the unconventional title of the film, director Neeraj Pandey told Mumbai Mirror, Aiyaary has been a special project with a very exciting ensemble. ‘Aiyaary’ means the ultimate trickery. The word ‘Aiyaary‘ fabulously sums up what a Soldier resorts to ultimately in the face of extreme crisis. His intelligence, sharpness, and wit not only bedazzles his own troop but also earns him the respect of his enemies. 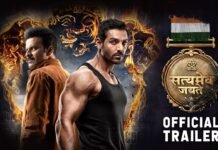