Actress Anjali will be next seen in an upcoming horror movie ‘Lisaa’, to be helmed by Raju Vishwanath and produced by Cinematographer PG Muthiah under the banner of PG Media Works. The maker has released the Anjali as Lisaa First Look Poster which gives a glimpse that Lisaa is a horror thriller drama. Anjali has also shared the Lissa first look poster of Lisaa on her Twitter and captioned it, “Me as Lisaa, my next Tamil #ANJALIasLISAA.” Lisaa will be the second horror flick of Anjali in a span of 2 years after having done Balloon previously.

Recently during the media interaction, the makers opened up about Anjali starrer Lisaa and said, “Lisaa will be the country’s first-ever stereoscopic 3D horror film shot in Helium 8K resolution. After My Dear Kuttichathan, there weren’t many films made in Tamil that employed the use of 3D technology. Santhosh Dhayanidhi is on the board to score the music and Gowtham is an editor for PG Media Works’ fourth production venture Lisaa. 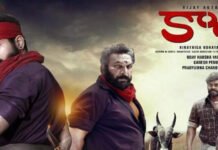