Anushka Shetty seems to be living a good family life till an incident happens and she gets wrongfully convicted of the crime she never did. After being taken to the jail, certain corrupt people decide to kill her and show it death by accident hence they take her to a haunted house where she meets her fate.

The house is not just haunted by the stories it is actually possessed by a ghost that looks like Anushka of the previous generation. Going by the Bhaagamathie trailer the story of ghost could entirely be in the head of Anushka because certain psychological game being played in her head like Vidya Balan in Akshay Kumar’s Bhool Bhulaiyaa.

The Bhaagamathie official trailer did not give an exact hint if it could be an actual horror or a psychological thriller disguised as horror until Anushka Shetty got transformed into the ghost and delivered some mass lines in order to scare daylights out of other people in the house. 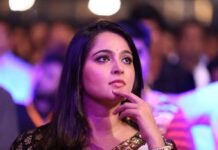