Bruna Abdullah Goes Topless: Mastizaade Actress Bruna Abdullah might not have any great films to her credit but the actress has completely got us hooked on her steamy pictures and posts on social media.The actress recently did a photo shoot where she posed completely topless.

Now, the pictures from the raunchy photoshoot have gone viral on the internet. The actress who was last seen in 2016 film Mastizaade is rarely seen in theatres, but her followers on Instagram get lucky to her oh-so-hot picture on social media. In yet another Bruna Abdullah topless picture by ace photographer Rahul Jhangiani, Bruna is only wearing a pair of denim hot pants with her hair let loose. Too Hot To handle! Isn’t it?

Compliments poured in from fans, who wished to see Bruna make a comeback in Bollywood. The Brazillian actress has films like I Hate Luv Storys and Grand Masti to her credit. She is also known for the hit number Subah Hone Na De from the Akshay Kumar and John Abraham starrer Desi Boyz. Bruna Abdullah has been missing from the big screen for a while now, but she continues to make headlines for her sultry photoshoots. 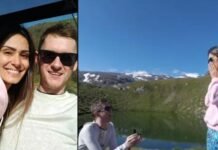 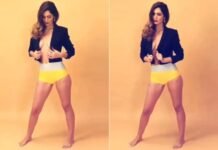