Chi La Sow is the latest film that is having a grand release by Annapurna studios on Friday. The film stars Sushanth and Ruhani Sharma in the lead roles. The Chi La Sow film also stars Vennela Kishore, Rahul Ramakrishna, Vidyu Raman, Rohini and others in the key roles. Rahul Ravindran is excited about his first film as a director and he already impressed Nagarjuna Akkineni with the movie. Check out the Chi La Sow Movie Review and Rating here.

Chi La Sow Movie Story about Arjun (Sushanth) does not want to get married anytime soon and postpones it for the next five years. Anjali (Ruhani Sharma) meets Arjun when her parents insisted on her to meet him for a wedding. After meeting Anjali, Arjun makes his stand clear that he is not ready for marriage and he is not interested in the marriage proposal. It creates some disturbances in both the lives. What are the disturbances and how did they overcome them? Forms the story of the movie.

The film stars an ensemble cast in the principal roles. Sushanth and Ruhani Sharma have given their best for the movie. The chemistry between the lead pair worked out well in the film. Anu Hassan, Rohini, Sanjay Swaroop, and Jaya Prakash played their parts well and added a lot of strength to the casting. Vennela Kishore and Rahul Ramakrishna has given their best and brought comedy in the movie. The rest of the cast is decent and made their presence felt.

Technical Aspects: The camera work by Sukumar and the editing by Chota K Prasad is brilliant in the film. The costume designing part by Shravya Varma deserves a special mention. The publicity designs by TSS Kumar have played a key part in the promotions of the film. The artwork is excellent. The music by Prashanth R Vihari has elevated the film in the right proportions. His background score has come out well in the Chi La Sow and the emotional scenes were elevated properly through music. The production values maintained by Jashwanth are grand.

Verdict: The Chi La Sow Movie is fun, emotion and sweet moments rightly blended. The characterizations of Arjun, Anjali with urbane outlook may appeal to the class audience. Vennela Kishore comedy scenes are major asset for this film. On flip side, narration is slow at times and Anjali’s nagging has been over done. All in all, Mr. Rahul Ravindran, in his debut as director, has delivered a promising film. It appeals to entire family. 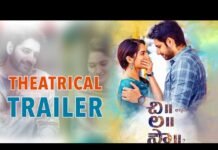