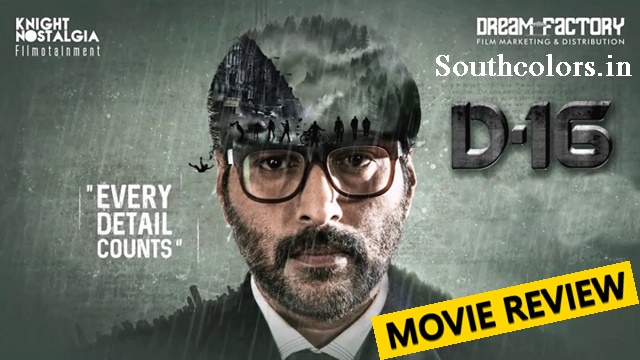 It is about a mysterious case dealt by Deepak (Rahman) and how he solves it. Though the investigation started to solve a murder mystery, Deepak in no time finds that there is more than a murder linked to that case. Subsequently, he finds that a woman’s missing and a hit and run are linked to this case. How he unfolds the truth? How the three events related to each other forms the story of ’16 Every Detail Counts ’.

Rahman is effective as the policeman called upon to do something which he does not quite cherish. Perhaps the film causes dilemma throughout the movie. The movie sometimes shows that it is in a high intense but audience doesn’t understand the cinematic feel in the movie. It’s just an insane suspense which makes you think where have we started.
Technical Aspects: Technically film is very rich. Sreejith Sarang’s crisp Editing, Jakes Bejoy’s background music, Sujith Sarang’s Cinematography deserves a special mention. They together give the film much-needed mood to this kind of thriller.Production values are rich.They deserve to be praised for their choice of films.Those who like murder mysteries without any regular commercial elements will love this film.
Cast Performance: The entire story revolves around Rahman and he pulled off his role superbly with ease. Rahman gave his best performance in this film. He looks perfect as an experienced cop who takes decisions quickly and act according to the situation. The casual act he did worked big time for the film. Hema Chandra’s dubbing suited him well. Rest of the cast are mostly first timers and everyone did their part well.

Verdict: On the whole, 16 Every Detail Counts Movie is a gripping murder mystery thriller filled with some good suspense right until the end of the film.If you are a fan of psychological suspense thrillers with umpteen twists and turns, this Film is for you. Go and Watch in a theater.