Dandupalyam 3 Official Trailer: The ‘Dandupalyam’ Franchise has become very popular. As Part 1 and Part 2 has become successful, Makers have come up with Part 3 now. The template followed for all of them is one and the same – Notorious Gang killing/raping women, looting valuables in the houses and the torture they will be subjected to when cops nab them at last. 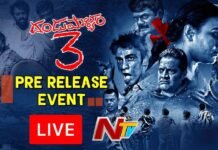