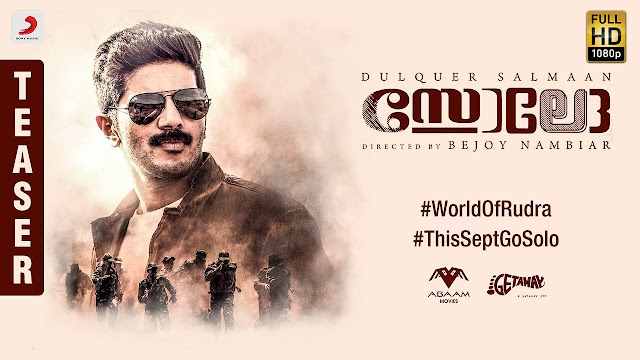 Dulquer Salmaan’s Solo Movie Teaser: The much-awaited teaser of Dulquer Salmaan starring Solo released on Saturday, August 12th, 2017. Solo is a romantic thriller film, directed and co-produced by  Bejoy Nambiar along with Abraham Mathew under the banners, Getaway Films, and Abaam Films. It is a bilingual film which Shot simultaneously in Malayalam and Tamil.  The stars Dulquer Salmaan and Neha Sharma in the lead role.
The Bollywood Popular director and producer Karan Johar launched the Solo teaser and shared it on his twitter. He tweeted, “An anthology film directed by @nambiarbejoy and starring the very talented @dulQuer #solo”.And Also Dulquer Salmaan took to twitter to share the teaser and wrote, “Welcome to the world of #Rudra! Here is the Malayalam teaser ?????? !! Enjoyyy !”.
The 1 minute 21 seconds long teaser is all about the ‘World of Rudra’. The teaser gives a glimpse of the romance and action in the life of Lt.Rudra Ramachandran (Dulquer Salmaan) and his girlfriend Akshara, played by Neha Sharma. The Video Clip promises that the film will be an absolute entertainer and has all the right elements to draw the viewers to theatres.