The controversial Indian model Arshi Khan has gone really far in the creative department. After posing semi-nude for the Indian team and for Afridi in the IPL, she has painted Shahid Afridi’s images on her bare breasts. Yes, you heard it right, Arshi Khan Nude Paints Shahid Afridi on Her Bare Bust. We are not sure what is gonna happen when these images of Arshi Khan stark naked only with Afridi smiling on her bare breasts go viral on social media,

but for now Javed Miandad has been offered the post of a mentor and coaching consultant by the franchise Peshawar Zalmi for the second edition of Pakistan Super League (PSL) in February in the UAE. He was given the post soon after he settled a dispute with Peshawar’s captain Shahid Afridi on Saturday, say reports in the Pakistani media.

The dispute erupted after Miandad, a veteran of 124 Tests and who remained head coach of the national time thrice, alleged that Afridi had fixed matches and he himself had caught him doing this.

Shahid Afridi and Javed Miandad recently buried their highly-publicised spat with a hug. Afridi had threatened to take Miandad to court over the allegations, insisting he had always played with for Pakistan and the allegations had tarnished his reputation and also deeply hurt his family and supporters.

Both appeared tougher on television on Saturday and announced they were burying their differences, which cricket critics and former players felt had the potential to derail Pakistan cricket with fresh allegations and stories about match-fixing.

We wonder what Arshi Khan has to say about all this, but the feisty model has made her support for Peshawar Zalmi clear with the devil-may-care images which were shot by fashion photographer Raju Asrani in Mumbai. We have also learned that filmmaker Maneesh Singh has teamed up with Arshi Khan for a film based on the life of Shahid Afridi.

Not long ago, Arshi Khan who plays the main lead in director Maneesh Singh’s film “Green Terror” posed with a Pakistani flag painted on her bust and crotch. And the images went viral within hours with thousands of shares on Twitter, Facebook, and other social media platforms.

We wonder what will happen this time… and we also wonder what fans of Peshawar Zalmi, Shahid Afridi, Javed Miandad and the rest of Pakistani cricket fanatics have to say about Arshi Khan’s controversial painting… a work of art or plain crazy antics? 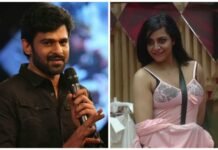 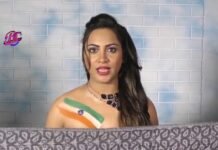