Nayanthara’s much-hyped Imaikkaa Nodigal Official Trailer and audio album were released on Wednesday, June 27. The makers organized an event which was graced by the cast and crew of the flick sans Atharvaa, who could not attend due to other commitments.

The Imaikkaa Nodigal Official Trailer has been packed with necessary commercial elements. Anurag Kashyap impresses as a psycho serial executioner and Nayanthara as a rebel cop steals the show. The chemistry between Atharvaa and Raashi Khanna works out well in the clip. Vijay Sethupathi has done an extended cameo as Nayan’s husband and people gets a glimpse to his role by the end of the video.

Imaikkaa Nodigal Tamil Movie is an action thriller and directed by R Ajay Gnanamuthu of Demonte Colony fame. Nayanthara plays an upright cop. the cat-and-mouse game between her and baddie enacted by Anurag Kashyap is the best part of the film. 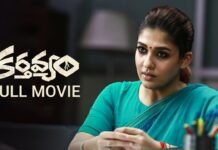