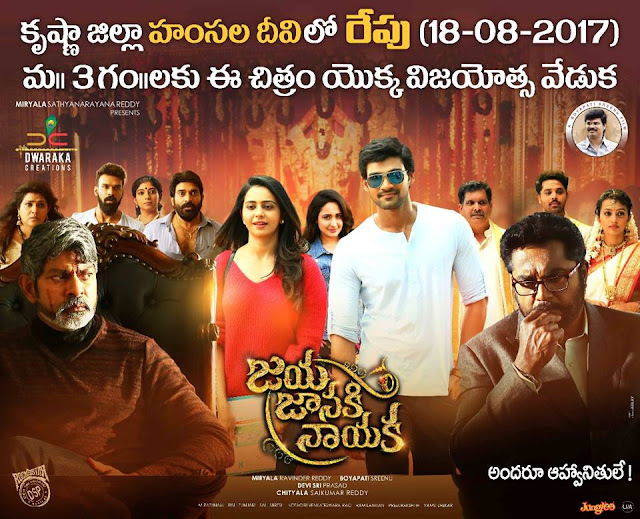 #JJN Vijayotsava Veduka at HamsalaDeevi: Director Boyapati Srinu’s Mass action and romantic entertainer ‘Jaya Janaki Nayaka’ starring Bellamkonda Sai Srinivas and Rakul Preet Singh, is running successfully at the box office and doing a decent collection. During the shoot of the movie, the makers shot the high voltage action sequence in Himsala Deevi in April month under the supervision of Ram Lakshman.
Now according to the latest update, Jaya Janaki Nayaka Movie team have decided to hold the success meet in this very special area (Himsala Deevi) which has become a tourist attraction of late in Andhra. The success meet event will take place on 18th August in a very grand maker and the entire film unit is expected to attend the event.
Jaya Janaki Nayaka (JJN) has collected Rs 15.10 Cr at the worldwide box office in the first weekend and beaten the records of Bellamkonda Sai Sreenivas’s previous releases Alludu Seenu and Speedunnodu. The film is successful in striking the chord with the audience and the word of mouth helped it do good business on week days.