Famous Singer Justin Bieber rescued a fellow party guest at actor Patrick Schwarzenegger’s Coachella party during a fight. According to the guests, Justin Bieber grabbed a drugged-up man and held him up against a wall after spotting him grabbing a woman by the throat, reports tmz.com. The singer was at the party with a friend on April 14 when the unnamed attacker, who appeared to be on drugs, attacked a woman.

Justin Bieber and his friend stepped in and tried to convince the man to stop. But when he didn’t, the singer hit the man in the face and pushed him against a wall.The Security then forced the guy out of the party. He was later arrested, according to the outlet, for causing a scene outside the bash as he started chasing an SUV he believed was Bieber’s. 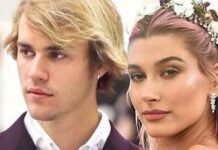