While several have found that scene extremely funny, singer Lata Mangeshkar family is not happy with Karan Johar for using that particular song.

“Why? Why did Karan Johar use Lata Didi’s immortal song in such an embarrassing situation? I still remember how ecstatic Karan Johar was when Didi had recorded the song for Kabhi Khushi Kabhie Gham. He said it was a dream come true. Why turn the dream song into a nightmare now?” the Press Trust of India quoted an irate family member as saying.

The family member justifying the statement said that the filmmaker could have used some other song to showcase the crucial ‘climax’ scene rather than using that song.

“At her age we don’t want to expose her to this kind of ugly desecration of her song. But we (Mangeshkar) wonder why he needed to use a Bhajan-like song sung in the most revered voice of Asia to show his heroine in an orgasmic state. He could have used any other song,” the family member said. 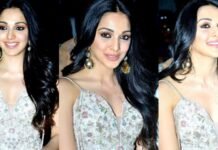