Malli Raava Movie Satellite Rights: Tollywood hero Akkineni Sumanth and Aakanksha Singh starrer ‘Maali Raava’, which was released on 8th December 2017 received positive responses from the audiences. Sumanth made his comeback with the romantic entertainer that worked well at the box office. The movie was directed by debutant Gowtam Tinnanuri and produced by Rahul Yadav Nakka.

According to sources, Malli Raava turned out to be a successful venture for the producer Rahul Yadav Nakka with the film grossing Rs 7 Cr in India and nearly Rs 1 Cr overseas. Sumanth and filmmakers have not sold satellite rights before or after the release of its film. Latest, we hear that they have sold Malli Raava satellite rights for a very hefty price.

Now according to the latest update, the Malli Raava Movie Satellite Rights have been sold out for Rs 1.4 Cr by Gemini TV (Sun network). This includes the digital rights of the film as well which is definitely a huge price for Sumanth’s film. 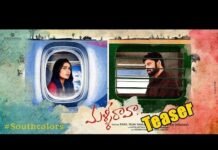