The Bollywood Actor Shah Rukh Khan Crosses 33 million+ followers on Twitter and the superstar shared a special video to thank his fans. SRK is one of the most followed Indians on Twitter. “This didn’t go as planned… but on a lazy Sunday afternoon, with my limited floatation expertise… this is the best I could do! Judge Nahi Karna, feel karna… Thanks” he wrote with video on the micro-blogging site.

The video posted by Shah Rukh Khan opens with “I thought everytime we reach a big number I should always do something special for you. But I normally don’t get the time, but today I’ve got the time. So I gelled by the hair back, I’ve worn my coolest dark glasses and I’ve even wearing a bow-tie if you notice a full tuxedo. “And today I want to give you the most overwhelming, loving message that I’ve given you in the last decade. Listen to it carefully because this is very very heartfelt,”

The 52-year-old also chose super dark sunglasses and pulled his hair back to get an overall perfect look before he began with his heartfelt sayings to fans. While we were waiting for Shah Rukh to mouth something special for his fans, we see him dive straight into the pool. Yes, much, much to our shock, we see the handsome actor with his dark glasses deep dive into the blue waters as some of his most iconic dialogues are played in the background. Just as when those evergreen lines stop, we have our King of Romance out of the water.

This didn’t go as planned…but on a lazy Sunday afternoon, with my limited floatation expertise..this is the best I could do! Judge nahi karna, feel karna…Thx. pic.twitter.com/50miTK7QKK

On the work front, Shah Rukh Khan is busy filming for Anand L Rai’s Zero where the actor will be seen in a double role – one of them being that of a person having dwarfism. The film also stars Katrina Kaif and Anushka Sharma marking the second occasion after 2012’s Jab Tak Hai Jaan when the trio has done a film together. 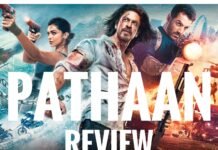